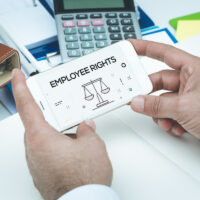 California has seen a wave of employee rights legislation in the past few years, expanding protections for employees and the responsibilities of employers.  Some of these new regulations go into effect this coming January.  We previously discussed new sexual harassment training deadlines for employers, California’s new hairstyle discrimination act, and a massive overhaul to the definition of “independent contractors” in AB 5.  (At the time of our prior post, AB5 had not yet passed.  It is now law.)  Below we provide a few other employee rights expansions and employer responsibilities to watch out for going into 2020.

Effective 2020, employees will have three years from the date of an alleged unlawful practice to file a complaint with the Department of Fair Employment and Housing alleging employment discrimination or harassment.  Previously employees had only one year to file their claims.

California workers were previously allowed to recover for an employer’s failure to timely pay their wages.  Effective January 1, 2020, aggrieved employees can bring an action to recover statutory penalties against the employer in addition to the unpaid wages.  Penalties start at $100 for each failure to pay each employee, and for subsequent or willful violations, the employer is subject to $200 for each failure to pay each employee plus 25 percent of the amount unlawfully withheld.

Restrictions on “no-rehire” clauses in settlements

Dispute-related settlement agreements may no longer include a clause specifically prohibiting the employee from ever working for that same employer in the future, with certain exceptions.  No-rehire clauses may be included if the employee is terminated for sexual harassment or sexual assault, or in severance or separation agreements unrelated to employment disputes.

If you are an employee with harassment or employee rights concerns in Orange, Riverside, San Bernardino, Los Angeles, or San Diego counties, or a California employer dealing with hostile work environment allegations, employee contract disputes, or other employment law issues, contact the seasoned and talented California employment law attorneys at Coast Employment Law at 714-551-9930 for a free consultation.

By Coast Employment Law, APC | Posted on November 29, 2019
What Clients
are Saying: