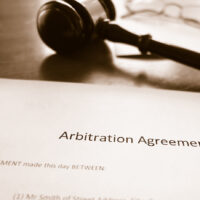 In a previous post, we explained that Governor Newsom signed into law a bill that bans employers from forcing employees to sign mandatory arbitration agreements as a condition of employment. The new law mirrored a bill that the California legislature had previously passed but which had been vetoed by former Governor Jerry Brown. Employee rights advocates celebrated the passage of the new law, but legal experts worry that the law may come into conflict with the Federal Arbitration Act (FAA). Despite the FAA, the U.S. Equal Employment Opportunity Commission (EEOC) had a longstanding policy statement disapproving of mandatory arbitration agreements as a condition of employment. In a surprise move, the EEOC just reversed its position.

If someone violates a legal duty they owe to you via law or contract, you might have the right to sue. Employers have legal duties to their employees under contract, such as continued payment of their salary and keeping to the terms of employment, as well as duties imposed by law to avoid harassment and discrimination.

Employers often prefer to avoid lawsuits when an employee claims the employer violated their rights. In recent years, employers around the country began requiring employees to sign binding arbitration agreements as a condition of employment. Such an agreement forces an employee to give up their right to bring claims of, for example, discrimination or harassment in court. Arbitration is cheaper and less formal than court proceedings, and, unlike lawsuits, arbitration proceedings can be kept private. Workers’ rights groups argue that arbitration always favors the more powerful party to a dispute while lawsuits offer a more even playing field, and where things like sexual harassment are involved, arbitration can be used to hide a history of inappropriate conduct.

The U.S. Equal Employment Opportunity Commission is the federal agency tasked with enforcing workers’ rights around the country. For a long time, the EEOC’s official position was that it disapproved of mandatory, binding arbitration agreements as a condition of employment. The EEOC worried that such agreements would have a “chilling effect” on employees filing charges of discrimination and harassment because workers (1) might not know that they still have the right to bring a claim to the EEOC, and (2) may be discouraged from filing charges because they know they cannot bring their claims in court. Arbitration also lacks certain procedural, structural, and constitutional safeguards that support workers who bring discrimination claims.

The EEOC recently announced a reversal of its position. The EEOC cited recent Supreme Court decisions that have dismissed concerns about the problems with arbitration and invalidated state laws and policies that conflict with the Federal Arbitration Act’s general purpose of encouraging arbitration over lawsuits. Notably, the EEOC stated that it will still review challenges to specific arbitration agreements or provisions but will no longer rely on a policy that disfavors them as a rule.

If you are an employee with discrimination or employee rights concerns in Orange, Riverside, San Bernardino, Los Angeles, or San Diego counties, or a California employer dealing with hostile work environment allegations, employee contract disputes, or other employment law issues, contact the seasoned and talented California employment law attorneys at Coast Employment Law at 714-551-9930 for a free consultation.

By Coast Employment Law, APC | Posted on January 29, 2020
What Clients
are Saying: