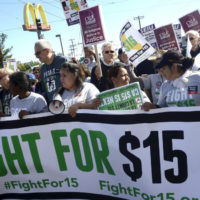 Regardless of whether you agree with California’s decision to gradually increase its minimum wage to $15.00 per hour by 2022, it is here!  On January 1, 2017, the first phase of Senate Bill 3, which has been codified as Labor Code § 1182.12 et seq., will take effect by raising the state’s minimum wage to $10.50 per hour for workers that are employed by businesses having 26 or more employees.  Below is a chart detailing the wage increases:

The minimum wage increases do not stop at $15.00 per hour.  Labor Code § 1182.12(c)(1) states that “on or before August 1 of that year, and on or before each August 1 thereafter, the Director of Finance shall calculate an adjusted minimum wage. The calculation shall increase the minimum wage by the lesser of” 1) “3.5 percent and” 2) “the rate of change in the averages of the most recent July 1 to June 30, inclusive, period over the preceding July 1 to June 30, inclusive, period for the United States Bureau of Labor Statistics nonseasonally adjusted United States Consumer Price Index for Urban Wage Earners and Clerical Workers (U.S. CPI-W). The result shall be rounded to the nearest ten cents ($0.10). Each adjusted minimum wage increase calculated under this subdivision shall take effect on the following January 1.”

By Jon McGrath | Posted on November 9, 2016 Tags: minimum wage
What Clients
are Saying: