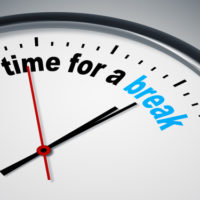 Employers typically understand that non-exempt and certain exempt employees are entitled to paid rest breaks.  Beyond this fact, rest breaks laws have been widely misunderstood by employers and employees alike.

California’s Wage Orders govern the amount and timing of rest periods.  It is very important for employers to review the Wage Order pertinent to their industry to understand their rights and obligations.  Regarding employee rest breaks, the typical Wage Order states as follows:

“Every employer shall authorize and permit all employees to take rest periods, which insofar as practicable shall be in the middle of each work period. The authorized rest period time shall be based on the total hours worked daily at the rate of ten (10) minutes net rest time per four (4) hours or major fraction thereof.” See Wage Order 1-2001, section 12(a).

Rest Breaks “shall be in the middle of each work period.”

The California Supreme Court in Brinker resolved the issue regarding timing of the rest breaks. See Brinker Restaurant Corp. v. The Superior Court of San Diego County (2012) 53 Cal.4th 1004, 139 Cal.Rptr.3d 315.  The Brinker court initially addressed the issue of whether an employer is required to provide the first rest break prior to a meal period.  On that issue, the Brinker court ruled that California law does not require an employer to provide a rest break prior to a meal period.

The Brinker court clarified the meaning of “middle of each work period” by ruling that a rest break must be provided within the period in which it accrues. As such, it appears an employee is entitle to separate rest breaks for every four hours of work, or major fraction thereof.

One Rest Break Per “four (4) hours or major fraction thereof.”

California Wage Orders ordinarily require employers to provide employees who work longer than three and one half (3 ½) hours are entitled to one or more paid rest breaks.  Beyond that point, employers have struggled to understand what it means to provide one rest break per “four (4) hours or major fraction thereof.”

In the event you have questions regarding your obligations or rights pertaining to rest breaks, you should contact a knowledgeable Employment Law attorney or HR professional.