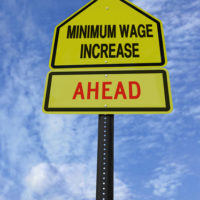 The wage hike is expected to have a broad impact, as currently 43% of California’s workers earn the minimum wage—an estimated 6.5 million residents. Gov. Brown signed the law into effect in Los Angeles, where he stated, “This is about economic justice, it’s about people. This is an important day, it’s not the end of the struggle but it’s a very important step forward.” The law has been lauded by the state’s unions but received a great deal of critical attention from business owners.

The law will roll out in several phases and contains certain exceptions under which the $15 hike won’t occur. The first phase of the law is set to enter effect on January 1, 2017, when the minimum wage will rise to $10.50 for employees of businesses with 26 or more employees. The next wage hike will occur on January 1, 2018, when it will increase to $11. The rate will continue to rise by $1 each January until 2022, when it is expected to hit $15. Smaller businesses with 25 or fewer employees will have an extra year to raise their wages from those of larger employers.

The law provides for a way for the governor to delay the following year’s increase, but only in two separate, specific cases. One of these is when California is experiencing an economic downturn, in a year where job growth has been negative for the previous three or six months and retail sales have been negative for the prior 12 months. The other case is where the state’s budget is predicted to be in deficit in either the current year, or up to two years ahead, if the wage increase is included. In such cases, the governor has the option to “pause” the increase for the next year if taking action by September 1 prior to the increase. However, this is an option for the governor, and not mandatory. Unlike New York’s $15 minimum wage law, the wage is slated to rise state-wide, with no variation in when the wage rate rises in more rural areas or areas where the cost of living is much lower. Critics of the law predict that this will make the law especially pernicious for small businesses in rural and inland areas.

If you need assistance in determining how California’s new and existing labor laws will affect your business, or feel that your rights under the law have been violated, contact the knowledgeable and seasoned Tustin employment attorneys at Coast Employment Law at 714-551-9930.

By Coast Employment Law, APC | Posted on April 25, 2016
What Clients
are Saying: