California’s New Attempt to Press the Boundaries of the Federal Arbitration Act (FAA). 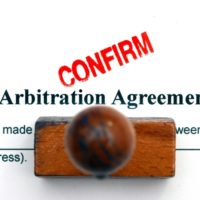 California has a long history of pressing the boundaries of the Federal Arbitration Act (FAA).  In doing so, California has resisted the federal government’s Supreme authority to establish the laws of the land.

“The Federal Arbitration Act states that a ‘written provision’ in a contract providing for “settle[ment] by arbitration” of ‘a controversy . . . arising out of ‘ that ‘contract . . . shall be valid, irrevocable, and enforceable, save upon such grounds as exist at law or in equity for the revocation of any contract.’” 9 U. S. C. §2. DIRECTV, Inc. v. Imburgia (2015) 577 U.S. __.  Such contracts are generally interpreted according to their plain reading.  California has resisted the FAA’s plain reading interpretation of contracts by insisting that California law and/or policy should influence the interpretation of arbitration agreements.

California’s initial struggles culminated in the ruling of AT&T Mobility LLC v. Concepcion.  In this case, the Supreme Court overruled a California decision that allowed the arbitration of class proceedings despite the existence of an arbitration agreement that clearly did not permit class proceedings.

It is notable that, in DIRECTV, the Supreme Court ruled that “the parties are free to choose the law governing an arbitration provision, including California law as it would have been if not pre-empted.”  In fact, “the Federal Arbitration Act allows parties to an arbitration contract considerable latitude to choose what law governs some or all of its provisions, including the law governing enforceability of a class-arbitration waiver. [citation]  In principle, they might choose to have portions of their contract governed by the law of Tibet, the law of prerevolutionary Russia…” Id.

Contrary to DIRECTV, effective January 1, 2017, California approved Senate Bill 1241 which tests the boundaries of the FAA, again!  Senate Bill 1241 “prohibit[s] an employer from requiring an employee who primarily resides and works in California, as a condition of employment, to agree to a provision that would require the employee to adjudicate outside of California a claim arising in California or deprive the employee of the substantive protection of California law with respect to a controversy arising in California.”  “The bill would provide that adjudication includes litigation and arbitration for purposes of these provisions.”

California’s new law is ripe for lawsuits challenging its permissibility pursuant to the pre-emptive laws of the US.  We will post again as soon as we hear about the first challenge to California’s new overstep.