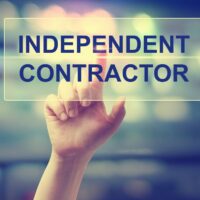 Understanding the type of employment you have with your hiring company is important for several reasons. In addition to helping you understand your tax liability at the end of the year, understanding your employment status allows you access to important benefits like workers’ compensation and health benefits.

For workers, misclassification of employees as independent contractors or vice versa can be a nightmare. Unexpected fees from tax obligations and loss of benefits are just some of the issues misclassified employees might have to deal with.

In the state of California, recently revised legislation including the adoption of AB5 has helped to combat the problem of misclassification by refining the test regarding whether a worker is an employee or independent contractor. Here’s what you need to know about the latest government regulations regarding employees and independent contractors.

What Is California’s AB5?

Assembly Bill 5 (AB 5) was signed into law in September 2019 by California governor Gavin Newsom. The law requires that the hiring entity must apply the “ABC test” to determine whether or not a prospective hire should be classified as an employee or an independent contractor.

The ABC test was first adopted in 2018 in the case of Dynamex Operations West, Inc. v. Superior Court and was later adopted into the Labor Code to further clarify the employment status between employees and independent contractors.

(B) The person performs work that is outside the usual course of the hiring entity’s business.

(C) The person is customarily engaged in an independently established trade, occupation, or business of the same nature as that involved in the work performed.

Does the ABC Test Always Need to Be Applied?

There are some cases in which the ABC test will not be required to determine an individual’s employment status. According to the Labor Code, certain motor carriers can be exempted from penalties for misclassifying their commercial drivers. Additionally, the ABC test does not apply to certain occupations and instances where an employment contract is drawn up.

Exceptions exist in which an employer does not have to administer the ABC test. Some occupations are exempt from the test. These occupations include but are not limited to the following:

Business-to-business contractors are also exempt from AB5. However, these contractors need to meet additional requirements as outlined by the state’s Labor Code.

In cases where workers are exempt under AB 5, they might still need to be evaluated under another measure, the Borello test.

The Borello test comes from a decision of the California Supreme Court in the 1989 case of S. G. Borello & Sons, Inc. v. Department of Industrial Relations, and it outlines a number of factors that help determine whether a worker is an employee or an independent contractor. Among these factors is whether the hiring entity has all necessary control over the means and manner of the work requested. Thirteen other factors are considered when evaluating a worker via the Borello test.

Under both the ABC test and the Borello test, a worker is presumed to be an employee unless the hiring entity can prove that they are an independent contractor. The ABC test, however, is a simpler, more streamlined method of evaluation than the Borello test.

How Does AB 5 Impact Independent Contractors?

There has been much debate about how workers should be classified, and AB5 aims in part to clarify the law. Still, misclassification of employment status continues to be an issue Californians face.

Being misclassified as an independent contractor instead of an employee can cause you to miss out on critical benefits including health care coverage. If you have concerns about your employment status, contacting an employment law attorney can help in your case.

To speak with an experienced lawyer, reach out to Coast Employment Law today. Our team will help you navigate your case and protect your rights and options under AB 5 and California’s Labor Laws.

By Coast Employment Law, APC | Posted on January 12, 2023
What Clients
are Saying: