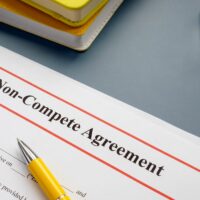 California employment law tends to lean heavily in favor of employee protections, and California law generally is very pro-competition (meaning against monopolistic power and any other restraints on trade). Non-compete agreements appear at first blush to be a restraint on trade as well as on employee freedoms. Especially when worded very broadly, they can significantly impact an employee’s ability to seek new employment, essentially locking an employee into a job or out of their own industry. Are these agreements valid under California law? If you are subject to a non-compete, can you fight it? If you are looking to protect your trade secrets and your customer base, can you enforce a non-compete against departing employees? Read on to learn about non-competes and California law, and call a knowledgeable California employee contract attorney for assistance with an employment law matter in Southern California.

What Are Non-Compete Agreements?

The ostensible purpose of a non-compete agreement is to protect the employer. Companies do not want to spend the time and money necessary to train an employee only for them to utilize those skills with a direct competitor of that company. Businesses also worry that employees will take insider information such as trade secrets or client/customer lists with them and steal business from their former employer. Employee rights advocates, on the other hand, see non-competes as a restriction on the freedom of employees based on unjustified or overblown fears by employers.

Can You Enforce a Non-Compete in California?

Most states allow non-compete agreements to some extent. Typically, if a non-compete is reasonably restricted in scope and duration, the non-compete can be enforced. For example, an employment contract could not restrict an employee from working for any tech company for the next 15 years, but it might restrict an employee from working for a direct competitor, providing the same services in the same region as their former employer, for 2-3 years.

In California, however, the rules are much stricter. California’s Business and Professions Code (BPC) states in no uncertain terms that, outside of limited exceptions explicitly stated in the BPC, “every contract by which anyone is restrained from engaging in a lawful profession, trade, or business of any kind is to that extent void.” California courts consistently hold that non-competes are unenforceable in California unless they fall within the explicitly enumerated exceptions.

The limited exceptions include partnerships, limited liability company (LLC) members, and other business owners. Companies can restrict partial business owners from directly competing after selling their ownership interests, so long as those restrictions are appropriately limited (e.g., limited to the geographical region of the former company), even though identical restrictions would be unenforceable against a former employee.

By Coast Employment Law, APC | Posted on December 23, 2021
What Clients
are Saying: